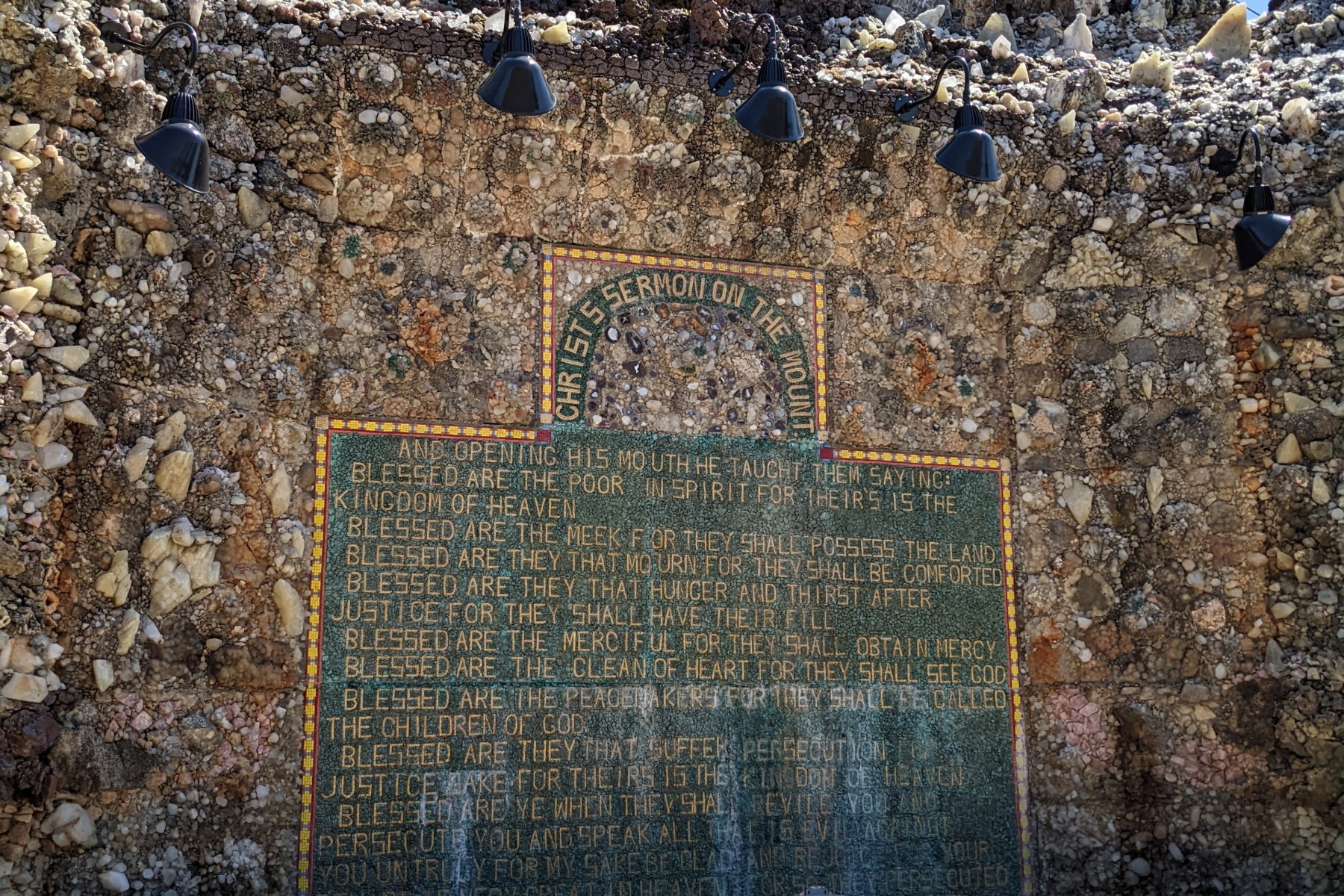 During our time in Iowa, we had 10 days where our coach was being worked on in the Winnebago factory. We spent our time scouring Northern Iowa and Southern Minnesota. The Grotto of Redemption caught my interest. It was a few hour drive from where we were staying but that was okay because we had nothing else pressing at the time. We made this a day trip. The drive was small towns surrounded by flat farmland as far as the eye could see.

This grotto is a creation inspired by Father Dobberstein. While he was critically ill, he prayed to the Virgin Mary to intercede on his health. In return, he promised to build a shrine in her honor. He recovered and his life task was born. He came to West Bend, IA in 1898 as a pastor where he started on his task. He spent many decades stockpiling rocks and precious stones. The real work began around 1912. He did almost all the work himself with his trusted helper Matt Szerensce. For the next 52 years they labored on this project. This project was not completed by the end of Father Dobberstein’s life. Father Greving was sent to take over clerical duties and help with the Grotto when Father Dobberstein was in his 70s. Father Dobberstein passed away in 1954. Mr. Szerensce worked on the Grotto until 1959. Father Greving cared for the community and continued to build the Grotto for 50 years.

We were completely blown away with the magnificence of this place. I’ve been to Grotto’s before but nothing like this; it tells the complete story of Jesus. I am not Catholic but as a Christian you could feel the Holy Spirit flowing through this place. I can see why over 100,000 people make a pilgrimage to this place each year. It is not an easy place to get to but it is something you have to experience in person. I don’t think any of my pictures do this place justice. The rocks and precious stones were placed with such precision. He could have build a small grotto and he would have fulfilled his promise. But this is a multi-level Grotto that includes the 12 stations of the cross. It is humbling. There is a museum next to the Grotto where you can learn about how the Grotto was built. There also is a food stand that sells hot dogs, chips and drinks. It is open 24 hours since it is an outside exhibit. Check their website before you go because they do give guided tours at different times during the year.

2 Comments on “Grotto of Redemption”